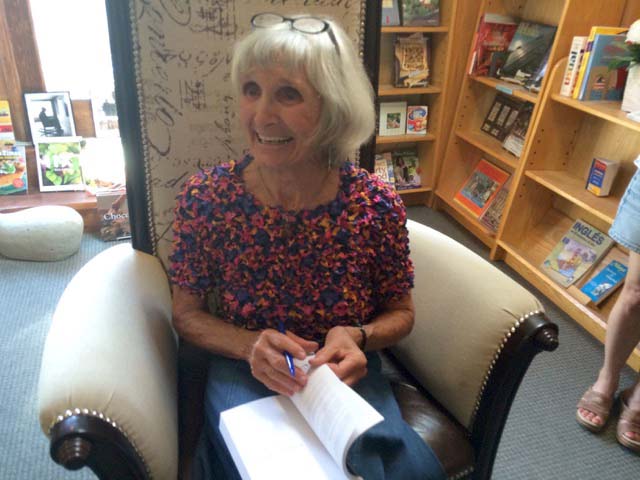 June 20, 2015—one of the best days of my seventy-seven-year life! The day of my first public reading from my newly-published memoir, Coming of Age: Come Rain or Come Shine.

I had scheduled it months before, during the crazy-making heavy editing phase of the book production. Those sessions with the manuscript when commas were contemplated and hyphens questioned. Nitpicking to the max. Was writing a book really coming down to punctuation? I certainly hoped not, and those spring days and nights of 2015 were difficult! As I set the reading date, I swooned with relief. The book would be done by then and I would be able to share it on a meaningful level, way past punctuation problems. The time of the solstice—when the sun is at its zenith–seemed perfect! The book’s emergence after so many years of writing—was certainly a high point in my life.

The place for this event was a bookstore in Taos, NM, called Moby Dickens. Its large, sunny, second floor space seemed perfect. Bookshelves lined its walls but there was adequate space to set up folding chairs. A large weather-beaten wooden desk bearing the signatures of other authors and a large throne-like chair, which the owner called the “author chair,” would be the focal point of the reading, where I would sit or stand and read from my story.

The Moby Dickens staffer had suggested I should plan to read for twenty minutes. I decided to read at least one episode from each of the six parts of the book. This would exceed twenty minutes but I wanted to give the audience a comprehensive sense of the book. I had chosen the material carefully, and practiced the presentation assiduously with my friend Edward. I realized I would have to project my voice and use all the skills I had learned in theatre class in order to be heard. If Edward could hear what I was saying, anybody could.

An hour before the two o’clock start¸ I arrived with Edward¸ along with my post-it-marked proof copy of the book. I also carried a boom box loaded with Ray Charles. I planned to have Ray crooning “Come Rain or Come Shine” as folks climbed the stairs.

Pretty soon they came, and came, and came. The space filled rapidly, the din of their excited chatter drowning out poor Ray on the boom box. By time for the owner’s introduction of me, it was standing room only. The room was crammed with seventy people at least, and some folks had to stand on the stairs.

As I stood before the desk—no sitting down for me—I welcomed them all, saying how special this occasion was for me, the moment I had been waiting for. After ten years of struggle to understand the story and write it down and ten months to edit and consider punctuation problems, I could at last tell my story.

I told the audience how I had pondered long and hard about what to wear. “Funny that I worried so much about that when I would ultimately be standing undressed before you.”

As it turned out, I read for forty-five minutes. I could have stopped half way through. If the audience squirmed or rustled, I would know it was too much, and had a way to stop. From the time I began to read though, until the time I finished, there was never a rustle, nothing but rapt attention, punctuated occasionally by chuckles. They were all with me one hundred per cent. During the reading I found a part of my voice I hadn’t perceived in the writing—a self-denigrating voice. I was chuckling too.

I began the reading where the book begins: when I received the email message from my husband of over forty years that he was leaving me. As I read, I could have heard a pin drop. Folks didn’t want to miss a word.

I told them about growing up in a small town in West Texas. Then going to college where I met my husband-to-be, and our marriage, and a stint in the Peace Corps. I related some strains on our union and unsuccessful attempts to hold it together. I read about one of my boyfriends after the divorce, then finished the presentation with my commitment to tell the truth in my story insofar as I understood it.

In the Q&A afterward there were only three questions. The only one I remember was “What happened to Paul.” “Oh, Paul!” I laughed. “Well, he just disappeared. Now he lives in California with a third wife.”

After the reading, I sat in the author’s chair—John Nichols had sat in that chair too—and signed the twenty-four copies sold that day, a record at Moby Dickens.

Compliments flowed after the event. I read “like a pro.” I was “a born performer.” “A natural,” with “comic timing.”